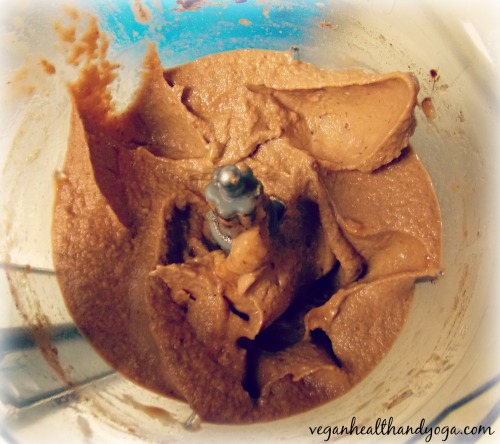 Fully RAW, dairy free, sugar free, gluten free, super simple rich chocolatey ice cream with only 5 easy ingredients! Yes, you can give into those “chocolate” cravings any time you want with this super healthy recipe. Getting the kids involved in making this can be a great way for you to show them that they don’t need icky dairy or sugar to enjoy eating ice cream. Its also a fun flavor to cool off with as an after dinner dessert for the whole family! 😀

Blend all the ingredients into a high powered blender for about 2 minutes until thick and smooth. Only use a few spills of the almond milk just to get the ingredients moving. Too much can end up making your ice cream runny. For a chunkier pecan texture, fold in a handful of chopped pecans after blending. If you decide to use cacao, it may not come out as sweet so make sure your bananas are extra ripe before freezing or you can add in a little stevia. That’s one of the reasons I prefer carob over cacao, it has its own natural sweetness. Makes about 4-5 half cup servings. Enjoy! 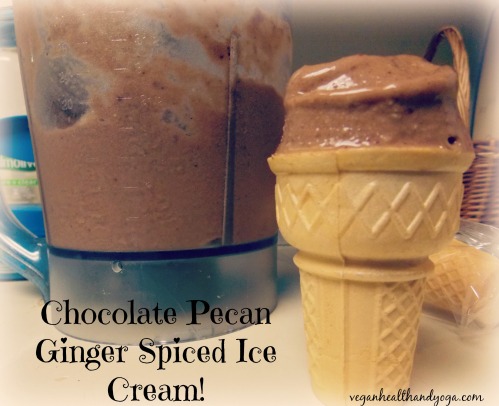 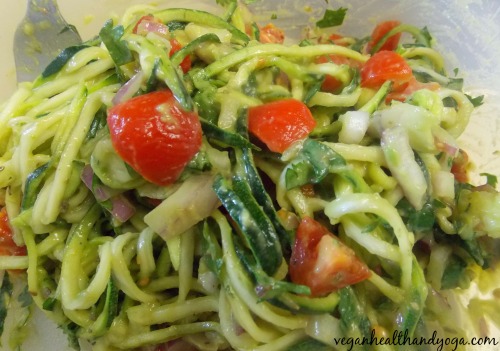 I finally made my own fully raw zucchini noodles but instead of the usual tomato pasta sauce, I smothered them in a tangy lime avocado dressing! Ordinary pasta dinners can add so much extra calories, a whopping 400 for just a 2 cup serving but zucchini noodles only have 60 calories for the same amount, plus their gluten free! You won’t feel bogged down after eating them either because raw noodles digest much faster so you can enjoy that second serving with no guilt. Raw noodles will fill you up because their loaded with fiber and provide you with more disease fighting nutrients than cooked processed pasta. Another little bonus is your saving water because there’s nothing to boil, drain, and throw out. 😉 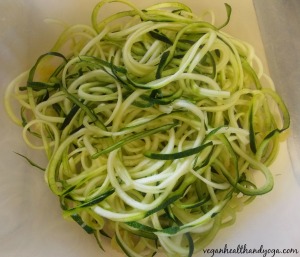 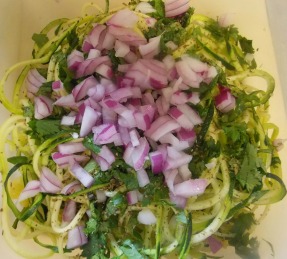 To make the raw noodles I used a Veggetti, which I bought for $15.00 at Target. The website says you can’t buy it at stores but I’ve seen the Veggetti at both Walmart and Target. It has metal handles to keep your hands safe and a cap that allows you to twist and hold the last inch of your vegetables while turning. 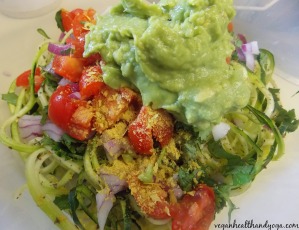 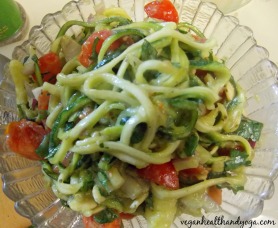 If kids can enjoy eating raw noodles, then you know their good! Kids can be the most pickiest of eaters, my son included, but he loved them. Hope you try and enjoy this recipe soon! 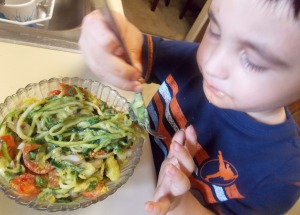 I used to be a pescatarian before changing to vegan. In case your wondering, a pescatarian is someone who doesn’t eat meat except for fish. My favorites used to be barramundi, tilapia, salmon, and tuna. Its been a long time but frankly I don’t miss it, especially with so many disastrous oil spills we keep hearing about on the news and especially after Fukushima.

Considering all the horrifying contamination events to our oceans just in the past 5 years, I’ll probably never want to eat fish ever again. Everything fish eat, we eat, and the bigger they grow, the bigger the contamination we are exposed to. Shunichi Tanaka, the head of Japan’s Nuclear Regulation Authority said radioactive water has been leaking into the Pacific Ocean since the March 2011 earthquake. The disaster has been reported as “the largest single contribution of radionuclides to the marine environment ever observed.” Today over 4 years later, TEPCO has still yet to gain control.

What is the FDA doing to screen for radiation? As of March 10th 2014, the FDA included about 225 seafood samples to monitor for Fukushima contamination and stated Cesium levels were well below the established “standards.” Basically, they concluded there were no public health concerns but do we really want to gamble our health based on random samples?? Probably the biggest question to ask ourselves is can we really trust the FDA and their findings, especially when other sources have reported otherwise. An article from 2 years ago reported that every Bluefin tuna tested off the coast of California was contaminated with Fukushima radiation. Every single one! So no, I don’t trust the FDA.

Ok, enough bad news and on to some good food news. I’m not one to brag but I have to admit, this “tuna” recipe came out great! These ingredients really pulled through and created that perfect plant based tuna flavor I was hoping for. It even smelled like tuna salad! It does contain quite a few ingredients but when your trying to imitate something such as meat or fish, you’ve got to experiment with what you’ve in the kitchen to get the flavors you want. The good part is the ingredients are pretty basic and easy to find, most of them found in every food pantry. 😉

You can enjoy this “tuna” mix with a green salad, on whole grain crackers, in a tuna sandwich, or even some “tuna” tacos using organic corn tortillas. If you prefer the mix to be creamier for sandwiches or crackers, simply add a little more Veganaise or avocado to smash in with the chickpeas and finely chop all of the ingredients before mixing them in. As for me, I prefer a chunkier texture but either way I hope you enjoy it as much as we did! 🙂